Collaboration and Problem Solving Before a Disaster Happens

Collaboration and Problem Solving Before a Disaster HappenslrcWebAdminFebruary 15, 2018July 12, 2019

Collaboration and Problem Solving Before a Disaster Happens

The United States was impacted by 16 separate billion-dollar weather and climate disaster events in 2017 exceeding $300 billion in total damages[1]. The total was yet another new record for the U.S.

With the increasing frequency and costs of disasters, the silver lining may be that there is at least more public awareness and potential opportunity for planners to integrate disaster resilience into our communities. Through comprehensive plans, hazard mitigation plans, and climate change plans, planners are making progress on setting more resilient policy for future development.

The more difficult lift, however, comes with mitigating impacts to existing development. New research shows that federal mitigation grants save $6 in future disaster costs for every $1 spent on hazard mitigation[2]. Funding is so limited for hazard mitigation, though, it’s often hard to get momentum behind a mitigation project before a disaster is imminent or has already happened.

For this reason, I was drawn to an Oregon Solutions project that was kicked off in 2013 to bring together regional stakeholders to address changing federal requirements for the Columbia River levee system within Multnomah County.  This project quickly evolved into coalition of over 20 partner organizations that was branded Levee Ready Columbia.

I was intrigued by the interest and collaboration of so many government agencies, businesses, and community groups to address the somewhat inconspicuous infrastructure of levees when there wasn’t a recent flood or breach to rally around. It has been four years now and interest in the project is still high with a recent three-hour meeting overflowing the City of Fairview Council Chambers. 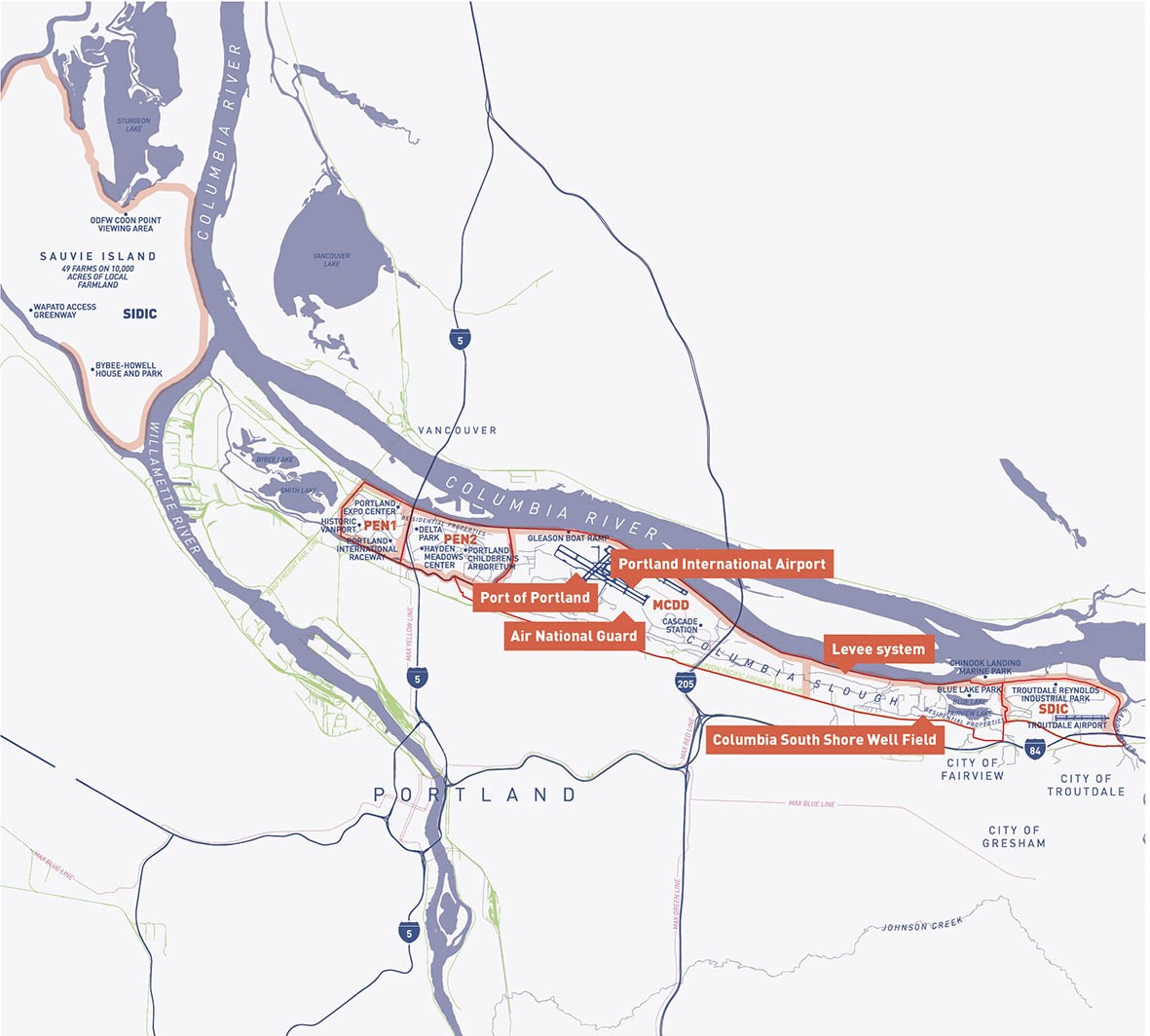 There is, of course, a good reason for this interest – the National Flood Insurance Program (NFIP). In 2012, the U.S. Army Corps of Engineers (USACE) updated their engineering standards for certification of levees. The evaluation and resulting update was prompted by the Hurricane Katrina levee failures.

Why would levee certification expiration inspire action? Because, for property behind a levee to avoid being mapped as a Special Flood Hazard Area under the NFIP, a levee must be certified by a professional engineer that it will perform well in reducing flooding from a 1% annual chance flood (also known as a 100-year flood).

Without this engineering certification and accreditation by the Federal Emergency Management Agency (FEMA), the NFIP maps the flood hazard as if the levee doesn’t exist. Properties in a Special Flood Hazard Area are required to buy flood insurance and development is restricted by local floodplain development regulations. With approximately $5.5 billion in property value behind the levees and more industrial development slated, the threat of this unexpected economic impact grabbed local officials’ attention.

The ideal hazard mitigation strategy is to limit development in hazard-prone areas and to use natural approaches to mitigation, but unfortunately it’s rarely feasible to do this on a large-scale in an already built environment.

In the early 20th century, farmers formed the five drainage districts in Multnomah County and began building embankments to allow year-round farming in the Columbia River floodplain.  The 1936 Flood Control Act allowed the USACE to make improvements and create 45 miles of federally authorized levees in the Portland area.  This led to more industrial uses and development in the managed floodplain, including the City of Vanport, which was subsequently destroyed by flooding in 1948 from three levee breaches.

Today, 27 miles of the levee system, from North Portland to the City of Troutdale, reduce flooding for a regional economic hub that includes the Portland International Airport, industrial parks, transportation infrastructure, 10% of Multnomah County jobs, and the second-largest potable water supply in the state. The other 18 miles of levee protect Sauvie Island which remains primarily an agricultural community.

With the enormous investment that has been made behind the levees, the residents, businesses, and region are now dependent on this aging infrastructure and must continue to invest in it to ensure public safety and economic stability. A draft analysis by the Oregon Department of Geology and Mineral Industries (DOGAMI) emphasizes what’s at stake – for instance, a levee failure near the Portland International Airport could result in an estimated $2.2 billion in damages and $1.4 billion in lost wages for the first year.[3]

So, despite limited public awareness of levees and the lack of recent local flood headlines, Levee Ready Columbia stakeholders have championed the significance of maintaining this regionally critical infrastructure and have committed funding and participation for four fiscal years to work toward both short- and long-term solutions.

For the short-term solution, it was quickly realized that the levees would need to be recertified to maintain accreditation with FEMA and avoid being remapped as a Special Flood Hazard Area. A plan for evaluating each of the drainage districts’ levee systems was developed and funding was pulled together by the local and regional government agencies with assistance from the State through grants and low-interest loans.  Business Oregon’s Special Public Works Fund has provided just under $4 million in grants and loans for Levee Ready Columbia’s engineering evaluations.

The evaluations will be wrapping up in 2018 and preliminary results show that a majority of the levee system meets federal standards. However, there are a handful of areas of concern that will require a remediation plan before certification can be completed.  Most daunting is a railroad embankment in North Portland that was the primary breach site of the Vanport Flood and is believed to still be a weak link in the system.  Due to it being within railroad right of way, Levee Ready Columbia has not been given access to take soil samples required for to conduct the engineering evaluations. 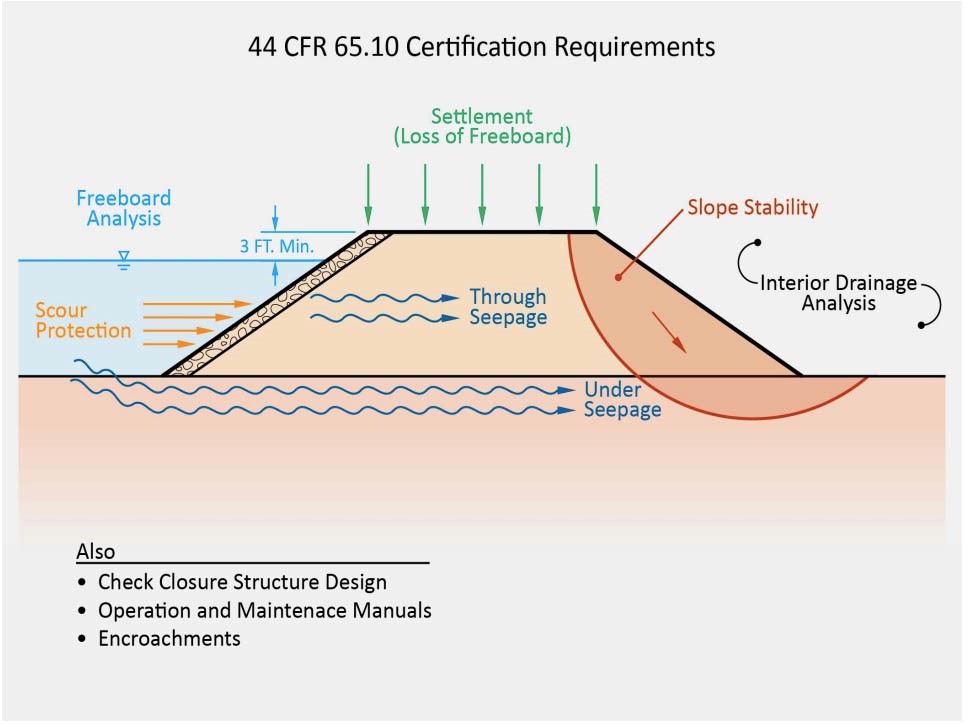 The work is now beginning to transition into long-term decision making.  Early on, Levee Ready Columbia stakeholders recognized that the certification process was a wakeup call for developing a more modern governance and funding structure for maintaining the level of flood risk reduction necessary for the region. They also realized that bringing all of the stakeholders together provided an opportunity to integrate community values into future improvements in the flood reduction system, such as environmental and recreational interests, as well as looking beyond the current regulations to consider future conditions and the level of risk acceptable for the community.

In 2015, 23 organizations signed a Declaration of Cooperation that committed Levee Ready Columbia to complete studies and embark on initiatives with a long-term focus.  One of these studies was to project the impacts of climate change on future flood stages of the Columbia River so that these changing conditions could be considered when developing capital projects. The US Geological Survey and USACE are currently finalizing this study’s report and have found that future peak flood stages (in the timeframe 2030-2060) on this portion of the Columbia River are estimated to be more than 1-meter higher than the peak stage observed in 1996 flooding.

Another effort that has recently been kicked off is to develop a risk-informed decision-making framework. This will be a tool that can be used to consistently evaluate capital projects by pulling in the data and analysis on risks and assets as well as considering community values and priorities. The most far reaching initiative of Levee Ready Columbia, however, is to identify a new long-term governance solution and build regional support for changing the status quo.

For the past year, a subcommittee of Levee Ready Columbia has been working on analyzing the challenges of the current system of flood management in the Portland region and identifying options that could solve some of these issues.  For 100 years, flood management along the Columbia River floodplain in Multnomah County has been divided between five drainage districts that are each run by a board of supervisors elected by property owners within the district.  This structure has historically worked for maintaining the current conditions of the levee system.

However, as conditions and regulations change, and the economic significance of the area continues to grow, there are shortcomings to the current governance model that are becoming clear.  For instance, some of the districts are constrained in collecting revenue due to tax compression and have limited capacity to issue bonds.  None of the districts have clear responsibility for maintaining accreditation in the NFIP since it is the role of the local land use agencies to participate in the NFIP.  Perhaps one of the biggest issues revolves around the fact that the whole region benefits from the assets protected by the levees but only the property owners within the districts pay to sustain and improve the levee system.

Over a dozen options for a new governance structure have been pitched, researched, and culled as Levee Ready Columbia searches for a structure that will meet its criteria, including adequate revenue raising capacity and political feasibility.  The interesting thing about this process is that despite extensive research of example flood management organizations across the country, there is no one structure that could be completely copied and implemented here in Oregon.  With different state statutes, taxing authorities, and institutional history, there are concepts that can be borrowed but finding the right fit of governance structure for our region requires a bit of creativity.

The governance analysis is coming to its final stage as the subcommittee plans to make a recommendation based on two finalist options. The public buy-in and implementation phase, however, is just beginning. There are still big questions to be determined, such as who will pay and how much.

Bringing the Columbia River levees up to new federal standards without a flood to galvanize public support remains our challenge. You can follow the progress at LeveeReadyColumbia.org or by attending one of the bimonthly project team meetings.